In Bed with a Highlander by Maya Banks 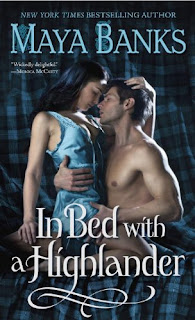 ﻿
To be completely honest I have read Maya Banks before, but was never really impressed. I definitely changed my opinion after reading In Bed with a Highlander.
IBwaH is the story of Mairin Stuart and Ewan McCabe. Mairin is the niece of the King of Scotland and has been living her life in hiding. This all comes to an end when she is stolen from the convent she lived in and held hostage for her dowry and holdings. She escapes with a help of a young boy Crispen, only to be rescued by the clan McCabe.
The first thing I noticed was the similarities between this book and Julie Garwood’s “Ransom.” I can’t go into too many details without posting a spoiler, but suffice to say I thought the two were very similar. Not carbon copies, but pretty similar.
I loved Mairin’s sassiness and her determination to not back down. She was brave without being foolhardy. I fell in love with her character as soon as she put herself between harm’s way and Crispen. When she was introduced to the clan I appreciated how fast the clan did NOT warm up to her. In many stories the heroine is introduced to her new or future family and is opened with loving arms regardless of her connection to the villain of the story. For this book, that was not the case and I appreciated that realism. A group of people struggling to survive shouldn’t be so accepting of someone they do not know. Another piece of realism I appreciated and applauded was how fast Laird McCabe presented himself as a suitor for Mairin. Once it became known who she was and her importance, Laird McCabe became as ruthless and as opportunistic as expected. I didn’t want his character to beat around the bush and act as if he didn’t really need Mairin and the resources she provided when he actually did. The best thing about Ewan’s character was his honesty. He was always truthful even when it could better aid his cause. The villain was everything you expect him to be. Sneaky, conniving, dishonest and cowardly. The best thing about this book is that every problem did not have an easy solution.  The discord between McCabe and the villain Laird Cameron and Mairin’s part in it all was not easily solved by the King of Scotland. In fact, the “King’s” involvement only adds to the struggle between these three.
I enjoyed this book and plan to continue the series to see how Ewan’s brothers end up.

*Sorry for the short review, but life currently has its claws in me.﻿
Posted by Kelly at 9:53 AM No comments:

Email ThisBlogThis!Share to TwitterShare to FacebookShare to Pinterest
Labels: 2011, in bed with a highlander, maya banks, mccabe 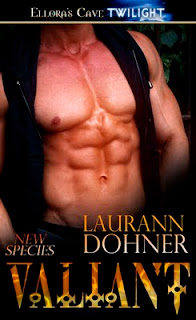 I cannot gush and praise this book enough. I started it last night and didn’t stop until I finished, which wasn’t until after midnight. Many already know I am a huge fan of Laurann Dohner and this new book in the New Species series is only fueling my addiction. I was so glad it was two hundred plus pages.
This is the story of Valiant a New Species member who takes more after his animal DNA, physically and personably. Valiant has a reputation as the most dangerous and most feared New Species. Tammy works for a catering service and was given bad directions and ends up in Valiant’s territory.
I feel like a broken record, but I’ll say it until it no longer applies. LD knows how to keep you invested in a book. Halfway through the book I noticed my back was hurting and I realized I had been hunched over my laptop for almost two hours. It was that good. When Valiant’s character was introduced in a previous book I wasn’t sure if I’d be interested in reading his story because his animal side was so much more prevalent than Fury’s or Slade’s, but I am glad I took the chance. I knew from previous experience to expect murder, sex, treachery and romance. I wasn’t disappointed. I was also happy to see cameos of previous characters. I also knew to expect at least two run-ins with the human terrorist organizations that are against the existence of the New Species.
I loved how intense LD made Valiant. He was uber protective, uber possessive, uber sexual. He was just uber in all ways. Be still my heart. If you want an Alpha, Valiant is that and more.  I knew that New Species were an intense breed, but Valiant brought new meaning to that term. He felt everything so much more intensely than the average man so when he finally fell for Tammy he fell completely. LD has a reputation for writing nail biters and this release didn’t deviate from the norm. The love scenes were explosive and enough to make anyone blush. These two had such intense passion and chemistry that it literally jumped off of the page. And just when you think the two are going to get a HEA something else happens and they’re back in the fray.
Definitely a must read. 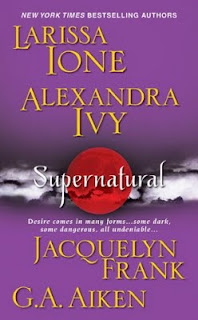 I’m not familiar with Larissa Ione as an author, but after reading Vampire Fight Club I love her. This whole world of vampire fight clubs with different creatures is awesome. I already love shifter books and for her to create a shifter fight club I was all in. I wasn’t too fond of the Nate character from the start, but I understood and sympathized with his plight. Alive so long that the desire for revenge had faded into dust. I was rooting for Lena from the get go. She was a good balance of honest feistiness to Nate’s icy emptiness. She came from a caring background minus the amount of violence that was natural to Nate’s world. I was definitely on board for the destruction of the villain, Fade, whom was responsible for Nate and Lena’s predicaments.  This story was nonstop action and heat. The fact that Lena was on borrowed time was very sad, but I knew that she would find some way to survive at the end of the book. I loved the fact that when the plot had been sorted out there were still enough sideline plot devices to push the story along for a couple of pages.
Note: Don’t need to have read the Demonica series to be able to follow along.
Once again I am not familiar with the writing of Alexandra Ivy (AI), but I know for a fact some of her books are in my TBR pile. The first thing I noticed was that the vampire clan chief of Great Britain put me in mind of Victor from the Underworld movie series whom was also a clan chief of vampires. Though, the names are the only similarities. The main male character Uriel has a definite backbone and isn’t what I would call a ‘yes man.’ He questions things, requests information and doesn’t just follow orders. I love bread crumbs of information and the teasing tidbit behind Uriel’s reluctance to rescue Laylah’s mother Kata had me chomping at the bit. AI drew me in with a small morsel and I was hooked. His history with the Jinn fired up enough curiosity inside of me that I wanted to finish this story. Curiosity quickly morphed into obsession when the triangle between Kata, her evil twin Marika and Uriel unfolded. I was a little dissatisfied with how quickly Uriel and Kata gave in to their mutual attraction. I understand that the timeline in a novella is shorter so they had to move quickly, but it was still a little fast and in your face. Though, I did enjoy it. I was glad there was a HEA for Kata based on her soul being tied to her evil twin. I’m very tempted to read the rest of the series.
I have read some of the Nightwalker series books and because of this I was comfortable following the story of Kane and his mate.  In my honest opinion I feel that it’s necessary to have some previous exposure to the Nightwalker books. Though, you can read this story and be able to follow along I would strongly suggest having a familiarity with the Nightwalker series. Even though Kane is over five decades old I still had a hard time seeing him as an adult. There was particular stress put on the fact that in his culture he was considered an adolescent until his next birthday so in my mind I continually saw a teenager. However, that picture quickly morphed into something else once he and his mate Corinne get hot and heavy. Due to the length of this story I appreciate that there wasn’t too much of an involved plot. It was strictly surrounding Kane and Corinne. There weren’t any outside villains nor were there any heinous plots against them.  It wasn’t my favorite in the anthology, but it is still worth reading.
I am intimately acquainted with Shelly Laurenston as an author. (I faithfully stalk her Pride and Pack series books) I have enjoyed her G.A.Aiken books and this one was no different. If you’re familiar with her Dragon series then the characters in this novella will ring familiar, but if not you’ll still enjoy the story. Ghleanna is the captain of the guard charged with protecting Bram who is a court negotiator. His job is to set up a peace treaty between the Desert Dragons and his Queen. I loved the spin on the traditional heroine and hero i.e. the woman Ghleanna is the hero. I enjoyed how unpredictable this story was. It wasn’t solely about Bram chasing Ghleanna. Yes, there were limited love scenes, but the story is strong enough that it didn’t matter.