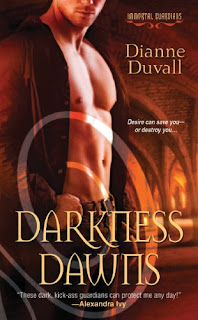 Once, Sarah Bingham's biggest challenge was making her students pay attention in class. Now, after rescuing a wounded stranger, she's landed in the middle of a battle between corrupt vampires and powerful immortals who also need blood to survive. Roland Warbrook is the most compelling man Sarah has ever laid hands on. But his desire for her is mingled with a hunger he can barely control . . .

In his nine centuries of immortal existence, no woman has tempted Roland as much as Sarah. But asking her to love him is impossible -- when it mean forfeiting the world she's always known, and the life he would do anything to protect.
This is my first time reading Dianne Duvall; though, I have heard her name mentioned in a few of the reader’s groups I belong to.  On reading the synopsis my first thought was oh another guardian of humanity book, but after reading an excerpt or two I decided that didn’t matter. These ‘protect humanity from the things that go bump in the night’ books are a favorite of mine. I don’t mind reading these just as long as there not the same story. The only overlap I want to read is the fact that they’re protecting humanity.
From the first page I was yanked into this story. I admit I did have to read the first few pages twice because I wasn’t sure who the villain was – the man being left for dead or the ones standing guard to make sure he was dead. I thought the hero being in trouble and in need of rescue was a good way to shake things up. Sometimes the hero is portrayed as being invincible and always one step ahead, but I appreciate a good dose of reality. My favorite character out of this entire book has to be Sarah. She was the perfect combination of damsel in distress and Xena Warrior Princess. If her back was against the wall she could defend herself, but she still would need rescuing from her Immortal Guardian lover. Roland was a runner up. DD did a good job of making Sarah and Roland the perfect couple. Sarah was open and aggressive where Roland was silent and brooding. She drew him out of his shell and the readers, as well as the other guardians in the book, were able to see a different side of Roland – the direct opposite of his previous persona.
I think it’s very important to point out that this book is NOT chocked full of love scenes. If plentiful sex scenes are a necessity to you then you would NOT enjoy this book. Personally, sex scenes are a necessity, but there doesn’t have to be one in every chapter. I can honestly say I could’ve done with one more, but I still loved this book. There was enough scheming, conspiracy and conflict that I was satisfied.
I was intrigued by how DD explained the guardian’s existence, tying it in with vampirism and attributing it to being a virus that not everyone can survive. I was especially intrigued by the fact that the leader of the guardians, Seth, had some secret knowledge about their origins but kept it to himself for the ‘greater good.’ The fact that your chances of being successfully transformed into a guardian is dependent upon your status as psychically gifted or not reminded me of another author’s series, but that’s where the similarities ended. These psychic individuals are not just mates for guardians, but are potential guardians themselves. I also thought it was great that Seth had a connection with each of the guardians as well as the potentials. He could tell when a potential guardian was born, when one was converted and when one died. If there was any doubt on how heavy Seth’s burden was this clarified it. I am already anticipating his story. All in all, this was a good read and I recommend it and the series. 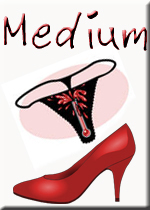