Mentored in Fire by K.F. Breene
My rating: 4 of 5 stars

I so love Reagan's crazy ass. So Reagan has been rescued by her dad and is now in the Underworld to get some training and get to know her dad. Cahal came with her and is there to keep her grounded. The level of intrigue, secrets, and power plays left me on the edge of my seat. Penny, Darius, and Emery are in the Underworld trying to rescue Reagan & Reagan is with Lucifer - learning the ropes. On the other hand, the world is in shambles. War is coming. The elves time is up. As Reagan said - you're either with them, Lucifer, or the elves. Vlad is still machinating. Ja is now fully in the mix. I can't wait to read the next book. I hope that Cahal and Roger both get their own book.

View all my reviews
Posted by Kelly at 8:32 PM No comments: 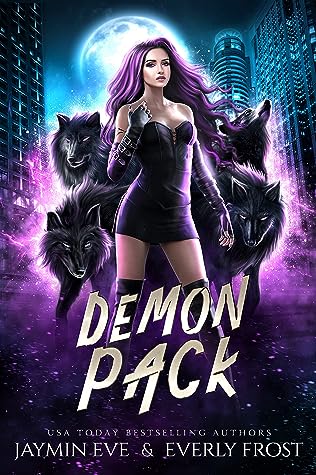 I’m no stranger to the dark. The shadows belong to me. But the dark can’t hide me forever...

I run with my own pack—my four demon wolves and the two friends I would kill to protect.

We might be the rejected shifters of the Vegas supernaturals, different and unwanted, but our pack is strong. Feared. Think of us as your local supernatural vigilantes.

With my demon wolves secretly watching our backs, we’re unstoppable. Until the night the first rune appears on the streets. A rune that hasn’t been seen for hundreds of years, sending the Vegas supernaturals into a tailspin.

It seems that the Master of Demon Runes has returned, a demon with unlimited power to deceive and kill, dragged up from the depths of the underworld itself.

What he wants, no one knows.

Because there’s a teeny tiny chance that my demon wolves used to be his. And an even larger chance he won’t return to the underworld without them…

So, its become obvious that Jaymin Eve is fast becoming one of my fav authors. I first discovered her writing in her Shadow Beast series. I saw that there is a part two coming in December, but I couldn't stop myself from starting this.

Nova is kick ass. She is the alpha of her pack, which consists of two outcast shifter hybrids (like herself) and 4 invisible wolves. The other two hybrids are sisters to her, Malia and Taniya. Together they all form a vigilante-like group that patrols the Vegas areas keeping out of line supernaturals in line. Unfortunately, on a <i> routine </i> operation they discover that the King of Demons has disappeared from the Underworld and as a result a high-level demon is running amok in their area. That combined with a mysterious stranger that tries to warn Nova and her pack away and the story begins. There are secrets that Nova holds, secrets that the mysterious stranger holds about himself, Nova, and what is actually going on, and there are secrets that entwine them all.

Action, secrets, intrigue, specieism, sexual tension, family. I loved every part of this book. I'm just sad that I have to wait until December for part two. This is definitely worth reading and I have already added part two to my TBR list.

ARC The Adversary by Thea Harrison 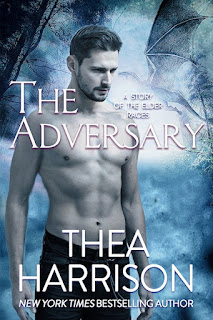 When Dragos and Pia move to the Other land of Rhyacia, they hope starting a new life will bring safety and freedom to their family, especially their young baby, Niall. And at first their new home seems perfect… but looks are deceiving.

Beneath Rhyacia’s idyllic façade an ancient, malevolent force lurks, waiting for the right opportunity to break free of its cage. When that opportunity comes, it strikes with devastating accuracy.

While Dragos has never backed down from a fight, he’s also never encountered an enemy like this one before. How can he fight a foe who doesn’t have a body? A foe who can invade and turn his own mind against him?

How can Dragos protect his family, when at any moment one of them may become the enemy?

As Dragos and Pia race against time to fight this unseen menace, they must also acknowledge a terrifying truth—when anyone can become the enemy, no one can be trusted.

An adversary who can trap the dragon poses a threat to everyone in Rhyacia, and that means no one is safe…

Dragos and Pia….two of my most favorite characters out of all of the books I have ever read. This pair have been through so much in their short time together. Two children and one new kingdom later – here we are. The Cuelebre power couple are trying to establish a kingdom for Elder races in a new dimension/world called Rhyacia. Pia, alongside the Elves, are able to sense and see shadow individuals that once resided in Rhyacia. That, however, is not where the problem resides. The building crews stumbled upon a crypt and when she and Dragos go to investigate an accident occurs and what comes out of the crypt alongside her is not her husband. Cue the Adversary title. Now Pia and the Sentinels, along with some New York Sentinels, and Liam (aka Peanut aka Cuelebre Heir #1) are fighting the being that his currently inhabiting Dragos.

This story is just as amazing as it sounds. It is full of non-stop action and edge of your seat intrigue. Technically, you can enjoy this book by only having read The Unseen; however, to get the full FEELS of friendship, determination, comradery, love, and dedication possible I recommend that you read at least a couple of the Elder Race novels. The Sentinels would be more like old friends if you do. 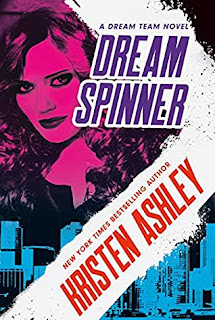 Hattie Yates has finally met the man of her dreams. Yet years of abuse from her demanding father have left her petrified of disappointment. She’s already failed to reach her goal of becoming a professional ballerina—she can’t handle the terrible consequences of another dream becoming a nightmare. But when a stalker sets their sights on Hattie, there’s only one man she dares to hope can help . . .

Axl Pantera knows Hattie is the only woman for him. Yet despite the attraction burning between them, Hattie refuses to let him in. The former soldier is determined to woo her into letting down her walls. And when danger comes calling, he’s up against more than her wary and bruised heart. Axl will do anything to prove to Hattie that they’re meant to be, but first, he’ll need to keep her safe.

Definitely a page turner. Definitely a classic Kristen Ashley read.
I love when this particular author teases the reader with potential future books by introducing spicy characters. Axl and Hattie though - wow. Hattie's life is in shambles - family drama leading her to push her friends away and absolutely block potential love matches. Cue the crazy dude harassing Hattie. Now we have a prime opportunity for Axl to slide into her life and blow things up with passion, love, friendship, and protection. Definitely a 5 star book!
*thanks to Netgalley for the ARC
Buy at Amazon here
Buy at B&N here
Posted by Kelly at 8:45 PM No comments:

Wild Wind by Kristen Ashley
My rating: 4 of 5 stars

Don't get me wrong I was interested in Jagger's story and I enjoyed quite a few things about this book - it just wasn't my fav. I got into it, but I didn't get into it.

First of all, I definitely enjoyed the change in heroine background. I don't see a lot of ethnic diversity in KA's books so to see that Archie was 1/4 Black and the fact that Jagger bonded with Mal - I felt that. She didn't gloss over the racism in some MC's and actually had Jagger address that.

Now Jagger and Archie...talk about some damaged people. Damaged in the sense of dealing with the death of a parent in their formative years. Archie knew her mom, but Jagger didn't really know his dad. We see there is underlying issues on the sides of both Archie and Jagger that kept them away from each other - and in some cases was still there preventing them from being all in with each other. It was nice to see Archie attempting to give Jagger what he needed emotionally, but we could see that there was something else there. Something standing in the way of Jagger going full tilt to Archie.
And when we learn what it is - cue the broken heart. Definitely time for Chaos to get involved.

All in all it was definitely worth the read. The length of the book was perfect for what we were dealing with.

View all my reviews
Posted by Kelly at 4:29 PM No comments:

Lightning Game by Christine Feehan
My rating: 5 of 5 stars

I have come to realize that the Ghostwalker series is my favorite Feehan series - one step above her Leopard people series. That being said I loved this book, but felt that it could've had a few more pages. (view spoiler)[ I would've appreciated a bit more follow up on the status of Zara's feet. Was Rubin and Jonquille able to help (hide spoiler)]

I love how we were able to see deeper into Diego and Rubin's past. I love that we were able to see deeper into Rubin and Diego as individuals as well as brothers. We see Rubin struggles with how he is perceived as royalty among Ghostwalkers, that his life means more than others, and how it affects him. We see Diego struggle with a deep-seeded need to protect his brother. So many nuggets of information provided in this book - about other Ghostwalkers and the Campo brothers. It is always nice to revisit prior characters while being provided new information. This series is not slowing down.

View all my reviews
Posted by Kelly at 4:17 PM No comments:

Repeat Offender by Lani Lynn Vale
My rating: 4 of 5 stars

This was different than the previous LLV books.

Historically, the 'heros' are cops/former military/medical professionals who are on the "right" side of the law. Use that word loosely. This is the first in a series of good men with complicated pasts. Histories that may include the military or law enforcement, but have ended in prison sentences. Lynn is the mayor and he doesn't take care of matters the way you would think a mayor would. But he get's things done. Things being a sex trafficking ring. Throw in a sassy wildlife blogger/photographer and we have ourselves a good story.

View all my reviews